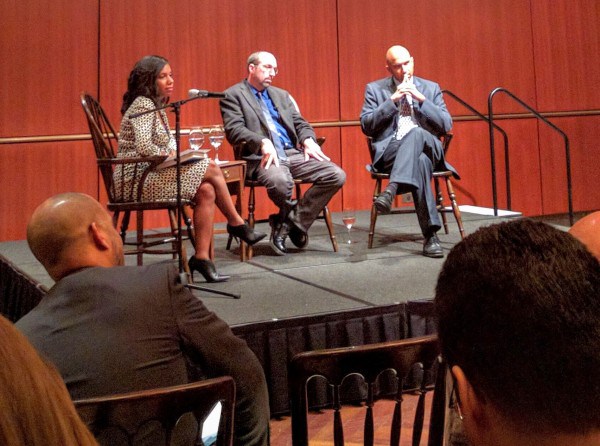 As former residents of Chicago’s public housing high-rise buildings sat in the front row inside the Newberry Library Thursday night, two community organizing scholars presented stories and research to show how the city’s decade-long push to fight concentrated poverty with mixed-income housing failed. Robert Chaskin and Mark Joseph discussed their new book, “Integrating the Inner City: The Promise and Perils of Mixed-Income Public Housing Transformation,” with WBEZ’s Natalie Moore at an event held by the University of Chicago’s Urban Network.

“From the beginning, these ideals of inclusion and integration have always been on the table, but never achieved,” said Todd Palmer, associate director and curator of the new National Public Housing Museum. introducing the authors and setting the night’s skeptical tone.

Chaskin is a professor at the University of Chicago School of Social Service Administration, and Joseph is director of the National Initiative on Mixed-Income Communities and a professor at the Case Western Reserve University school of applied social sciences, For an hour, they analyzed Chicago’s plan from 2000 to tear down the city’s high-rise public housing and replace it with mixed-income housing. They argued that mixed-income housing failed to achieve its supposed goals of fighting poverty by diversifying low-income communities. The authors agreed that the plan misunderstood and undermined the strength of communities in high-rise public housing.

Chaskin argued that history reveals Chicago’s arguments for the importance of mixed-income and integration to be rationales for “taking over, reappropriating and redeveloping” land. Joseph agreed and explained the difference between the the mixed-income plan’s stated goals and the successes they’ve achieved.

“If your goal was unlocking these swaths of land that have been tied up for so long with public housing, the violence and the crime,” Joseph said, “then you have to say that mixed-income has been an incredible success.”

But, Joseph said, that is not how the Chicago Housing Authority sold its mixed-income plan to the public 15 years ago. The speeches and the rhetoric of the time centered solely on the high-rise public housing residents and how the changes would benefit them. In this goal, Joseph and Chaskin argued, the plan failed.

Chicago’s impressive spending to build mixed-income housing created the shell of improved neighborhoods, Chaskin said, but failed to follow that up with the sociability needed to create a real community.

“We’re not filling [the mixed-income neighborhoods] with that process of taking the time, getting past the discomfort of getting to connect with someone unlike yourself” that leads to effective neighboring, Chaskin said.

Natalie Moore joined the authors in recalling an infamous incident within the Westhaven development that replaced the West Side Henry Horner Homes that illustrated the mixed-income model’s faults. Low-income residents of a mid-rise condo building would sit on couches in the building’s lobby, socializing during the day. Higher-income condo owners in the building disliked this and organized to remove the couches.

“It was a clash of ‘I want people to live like me,’” Moore said. “There wasn’t this sense of ‘I am here on Henry Horner’s footprint.’ It’s more like, ‘I want suburban living within an urban context.’”

The story showed what the authors called a main problem with the motives behind mixed-income housing. To make that type of housing work, public housing residents must merge into a neighborhood’s normal governing bodies.

“But the idea of mainstreaming public housing residents into available opportunities for deliberation I think actually served to silence them,” Chaskin said. “It really stems from an enduring idea about an urban underclass, that somehow poorer people have a different set of values and aspirations…a culture of poverty.”

Even high-rise public housing residents who moved out of areas with high poverty concentrations using the plan’s housing vouchers fared poorly. The authors said their studies showed that these residents mostly moved into similar racially and economically segregated neighborhoods.

The former public housing residents in attendance shared their positive memories of the high-rises.

“A community of public housing is just like any other community. It’s a community that is like a whole generation of families, because everyone looks after each other,” said Ture Champion in a video screened before the discussion. Champion serves on the National Public Housing Museum’s Youth Advisory Council.