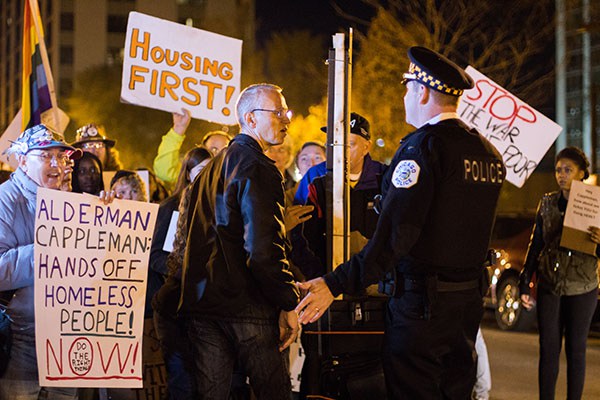 Activists joined homeless residents of Uptown the evening of Nov. 9 to protest police treatment of people living in the nearby tent city. Protesters marched from the enclave off Wilson Avenue and Lake Shore Drive to Alderman James Cappleman’s house, shouting chants and demands along the way. They ended by confronting the alderman in his ward office.

Andy Thayer, co-founder of the Gay Liberation Network, led the group throughout the night. He challenged Cappleman to protect Uptown’s homeless population by firing police officers that have been ticketing the tent city residents.

Tensions have been high around the city’s treatment of homeless people along the North Side lakefront since at least this summer, when homeless people were removed in advance of a concert on the lakefront by the band Mumford & Sons.

The protest began with Thayer surrounded by Uptown’s homeless residents and within sight of their sleeping bags and tents. The tent city residents moved to the park after police forced them out from under the nearby viaduct. Thayer argued that the police officers’ actions deserved punishment from Cappleman.

“He says he cares about the homeless. That’s a lie,” Thayer said.

Speakers connected the homelessness crisis they are experiencing to the city’s controversial redevelopment of public housing.

Some said they have been waiting for years for vouchers from the Chicago Housing Authority that subsidize apartments so that people pay only a third of their income in rent. Many residents said they have nowhere else to go when police force them out of aqueducts and parks.

Terry McDade, 54, lives in the park. He said he has been waiting 10 years for a housing voucher to come through. He struggled with substance abuse before trying to get clean and get housed.

“Now I try to stay out of trouble, keep my nose clean, and they’re trying to tell me that it’s illegal to be homeless,” McDade said. “All I want is some place to live. When they tore the [public housing] projects down, they promised affordable housing. Now when they tear a project down, they build condos.”

Jose Alicea, 53, is McDade’s neighbor in the park. He and his wife, Laura Schwartz, 51, were living in an Uptown homeless shelter run by Cornerstone Community Outreach before moving to the park when their time limit at the shelter ran out. Like McDade, the two are waiting for housing vouchers. They have also been harassed by the police, they said.

“Every morning, I take my tent down, the police can’t tell us nothing,” Alicea said. “I’ve been ticketed, whipped up on the face. How am I supposed to go to court? I’m homeless!”
Pointing to an unmarked police car, Alicea added, “They’re afraid of the cameras, but they’ll be back.”

After delivering speeches in the park, almost 100 protesters marched down one lane of Wilson Avenue. Thayer led the group in chants:

When they reached Cappleman’s home on Kenmore Avenue, protesters shouted “shame” for a few minutes. Thayer announced that Cappleman was at his office for his weekly office hours. So the group walked down to the ward offices and crowded into the storefront space.

Getting in the alderman’s face, protesters called for Cappleman’s resignation and accused him of lying to protect business interests. When he started responding to questions, protesters shouted him down with cries of “liar” and “no!”

“I share many of the protesters’ concerns about the impact of the police sweeps on our homeless neighbors,” Cappleman said in the statement. “I continue to advocate for keeping and adding more affordable housing in our community and throughout Chicago.”