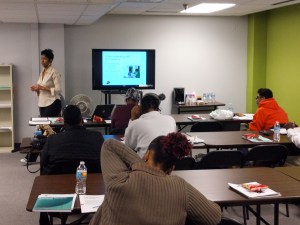 In a small conference room in a Loop office building every Tuesday and Thursday, an ebullient social worker spends one hour convincing five to 20 people that they can move their families to Chicago’s priciest neighborhoods. She spends the next two hours explaining how.

As an education counsellor for Housing Choice Partners (HCP), Tavia Jordan leads these workshops aimed at convincing new holders of housing choice vouchers that they can and should move out of traditional voucher neighborhoods and into so-called “opportunity areas.”

The federally-subsidized vouchers, formerly known as Section 8, pay for two-thirds of a family’s rent up to a certain price. Studies from the U.S. Department of Housing and Urban Development and the Poverty and Race Research Action Council have shown that although these vouchers can theoretically be used in any part of the city, people tend to return to the neighborhoods with high concentrations of poverty in which they grew up.

Jordan’s organization participates in the Chicago Housing Authority’s mobility counselling program, which aims to deconcentrate voucher holders out of these areas and spread them out into the city’s economically healthier neighborhoods.

The CHA designates the exact boundaries of these opportunity areas, where voucher holders receive higher rent subsidies and special assistance in transitioning to their new communities. These areas all have at least 80 percent of residents living above the poverty level and no more than 5 percent of residents living in public or subsidized housing.

Jordan paused for a while on the CHA’s map of opportunity areas, letting it sink in where in Chicago these neighborhoods are and, just as importantly, where they aren’t. While most of the areas are in Chicago’s North and Northwest Sides, where rents can surpass the CHA’s upper limit for subsidies, Jordan focused on the South Side neighborhood of Clearing on one Thursday afternoon workshop.

“Does anyone know what’s there on the south-west side? That’s a hint, by the way,” Jordan asked the group of 12 voucher holders.

“That’s the airport!” Marcella Thomas said. Thomas received her voucher on Oct. 3. She said she wants to move with her 5-year-old daughter Nia from the South Side up to the South Loop, where Nia will be close to her school.

Jordan leads her workshop with a mix of real-life examples and enthusiasm that engages the voucher holders there, like she was their neighbor explaining the ins and outs of a complicated system. She explained that Clearing’s proximity to Midway airport means it has easy access to public transit and transportation jobs.

Jordan has a 7-year-old daughter of her own, and most of her arguments for moving to opportunity areas speak to her experience as a mother. She focuses on how voucher holders can find better jobs to support their families, avoid the health risks of high-poverty areas and improve their children’s education just by moving to the right neighborhood.

“What I want to see is that families are able to live in better areas for their children,” Jordan said. “Their lives can go in such a different direction if they live in a different area. You don’t know what that inner city kid could become. He could be the next Barack Obama if you gave him the opportunity.”

To show voucher holders exactly how they can move to a more expensive neighborhood, Jordan has them each fill out a Mobility Action Plan. Fields such as “Community Goals,” “Unit Goals” and “Action Steps” are all intended to get people thinking about how they can achieve the goal Jordan helped them set.

“This is the fun part, because this is where you can put down your hopes for where you want to live,” Jordan said.

“I think it’s important to really educate people on what they need to do to gain better housing,” Jordan said. “There is so much up against them with obstacles like discrimination, so as much as I can give to help, I do.”

At one point, Jordan acted out all the discriminatory responses from landlords she’s heard throughout her two years as a counsellor. After people offered their own examples, Jordan distributed a discrimination form they can fill out with their complaint. The form goes to the personal housing counselor who works with voucher holders throughout their apartment search as part of the mobility program.

Shinnette Johnson works with Jordan as an education counsellor. She praised Jordan’s energy and connection to the voucher holders.

“It makes it interesting so that people get excited,” Johnson said. Introducing Jordan, Johnson called her “certified and boardroom ready.”

After helping people complete their action plans, Jordan worked through a slideshow covering dozens of tips on finding, renting and maintaining apartments in opportunity areas. Housing Choice Partners gives tours of available places throughout Chicago on most Wednesdays, and Jordan handed out a sheet of apartment hunting websites.

“They say that [finding an apartment] is like finding a needle in a haystack,” Jordan said. “But who has time to find the needle when you got 90 days!?”

Jordan closed the workshop with a question.

“What is our short-term goal right now?” she asked.

“We got to find a place!” Thomas answered.

“Get out there and get your palaces!” Jordan said.

After the workshop, Thomas said she felt prepared to brave a new environment for her daughter.

“I’m pretty hopeful. I feel like I can go out and get a place tomorrow,” Thomas said. “I feel empowered. It’s good to just have someone available. I’m not doing this journey on my own.”